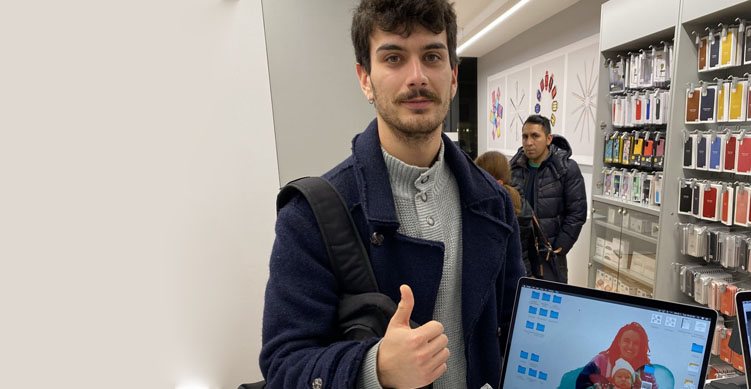 “If we haven’t had access to the Techsave technology, the customer had to pay 876€ for a new logic board, 60€ for labour charge and another 60€ for data recovery. Instead he payed 299€ for at Techsave clean, and got a fully functioning laptop back with all his data recovered – a difference on 697 euro,” Daniele Bompignano from R-store tells.

So overall Marco saved nearly 700 euro by going to R-store, a Techsave partner, rather than going to any other repai center in Milano. Naturally Marco was very satisfied with the service at the certified Techsave partner, R-store.

Had Marco taken his liquid damaged MacBook Pro, to a repair center, that didn’t have access to the Techsave technology yet, his MacBook would probably have been discarded because of the repair costs, and Marco had to buy a new laptop. That would not only have been bad for Marco’s economy, but it would also have been bad for the environment. Because each time a laptop is cleaned and saved from a liquid damage, approximately 386 kg of CO2 is saved. ⁠That is the same amount of energy use, an average household has for 11 days.

So yet again Techsave helped both the customer to save money and the environment for unnecessary use of resources. Remember this, next time you have a liquid damage and go to a Techsave partner!

Vote for Techsave at the People’s Choice Award

Will rice save your smartphone?

Techsave lifts the cap to sustainability

Techsave is setting a green agenda

Did you know? Techsave reduces the amount of e-scrap